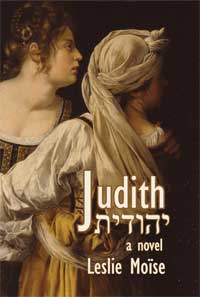 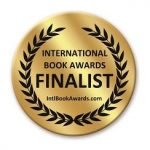 2015 finalist in the International Book Awards

About the author  |  Also by Leslie Moïse: Love Is the Thread  |  Library Request Form (PDF)

In the ancient Middle East a pious, wealthy young widow risks her life to save her town from a besieging army. Based on the apocryphal Book of Judith.

“The apocryphal Book of Judith is considered by some to be fiction,
its actual historical truth in doubt. But the chutzpah of its heroine
and its message of fidelity to God arouse both admiration and inspiration.
Moïse (Love is the Thread: A Knitting Friendship), a folklore specialist,
evokes the heroine’s side of this ancient parable. Extensive research
into the period when events in the story of Judith occurred, around 350-100 BCE,
allows her to include abundant detail regarding the customs, clothing,
and domestic arrangements of Hebrew villagers; behaviors of Assyrian warriors;
and, in particular, perceptions and treatment of women. Faithful widow Judith,
grieving and childless, befriends the Assyrian defector Achior, whose message from
Nebuchadnezzar’s general, Holofernes, to Judith’s village of Bethulia is ‘Surrender or die.’
As Holofernes lays siege to the village, Judith receives visions from God and pleas
from her friends to help save the village. In danger of rape and death,
she overcomes fear through faith and ritual, with the support of her maid, Abra; Achior; and the general’s slave.
Her defeat of Holofernes forms the satisfying climax of this occasionally slow-moving
but always well-imagined novel.”

“The ancient story of Judith of Bethulia is given a powerful heartbeat in this imagining by Leslie Moïse….
Moïse’s writing is immediate and empathetic, her characters vividly drawn.
Judith is an engrossing read that you will not want to put down.”

“For anyone who has ever wondered about the mysterious figure of Judith,
this book provides a realistic and action-packed context for her heroic act….
She comes alive in this fast-moving account of a critical time of siege and sacrifice
that surmounts the centuries and speaks to readers today.”

“Many writings on the story of Judith have been appropriated by religious scholars,
secular groups, and artists through paintings, essays and theses….
Judith is a novel approach to this ancient story laid into a storytelling format
with modern language; it gives the lay person an opportunity
to make her or his own discoveries.”

“As a history buff, I found Judith to be quite profound
in filling the blanks of possibilities regarding the unwritten details of turbulent lands,
relationships and societal structures, especially in terms of a woman’s status.
Whether or not you are familiar with the story, Christian or non-Christian,
the human element of history is what defines this well-written story.
Judith’s strength, intelligence and sense of responsibility is the crux that holds the reader
to the pages, just as these qualities held her people together in a time of need.”

“In this, her second book published by Pearlsong Press,
Leslie Moise skillfully births the story of one of Biblical history’s greatest enigmas.
She pulls Judith from the shadows and breathes her full of life,
immeasurable strength and beauty.

“Judith of Bethulia is but a mention in the Apocrypha chapter bearing her name.
Widowed in a time when women are of no man’s consequence,
she is now chosen to receive and carry the word of God.
She powerfully rises from the dust to epitomize both the sacred feminine
and power of faith….Moise masterfully delivers characters of depth and palpability
and a story line that propels us through the ages. She gives voice to Judith,
a heroine whose powerful message has been silenced way too long.
Judith is a must read.”