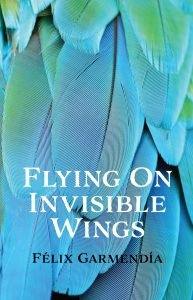 Small town boy journeys from Ponce, Puerto Rico to Manhattan: a riff on many famous movies and books. Except in this case the boy is gay, confused, frightened, and trying to find where he will fit in and be happy.

In the same year he becomes wheelchair-bound, the man rediscovers an old love: writing poetry. He begins to write. He writes more. He becomes adept. His poetry soars. “This,” he says, “is what I should have been doing all along.”

As you read the poems of Félix Garmendía, you will say to yourself, “This is what I should have been reading all along.” You will discern influences from Whitman, from Neruda, and also from the art of Frida Kahlo, with whom Felix feels a particularly strong kinship as a disabled artist. After all, he says, they both fly on invisible wings.

In this book you will discover poems light as the summer art in Fort Tryon Park, poems as down and raunchy as a honky-tonk on Canal Street, poems as pensive and stately as the Statue of Liberty and her pedestal. For in many ways this book also pays homage to New York, Félix’s fiercely loved home since 1988.

Happy, sad, frightened, soaring, ecstatic, loving. Moods galore and then some. Images that magic you from deep anguish to utter excitement and bliss. Come fly with Félix. You will never read anything quite like these poems. You may even find your own invisible wings.

PRAISE for Flying on Invisible Wings

The poet invites us to share his journey to a world where bodies are celebrated
and souls mingle in song. Garmendía’s world is a place where poems create new lands,
and magic rules.
Kim Dramer, Ph.D.
Author and art historian

A life intensively lived, an endless stream of emotional states, melancholic wanderings
of the acute consciousness owned by Félix. He becomes the poem of our lives.
He transforms extremes into magic.
An immense task accomplished by an immense heart.
Otón Olivieri
Actress, director, professor of theater studies
at the University of Puerto Rico since 2000

A poet owns his soul, a poet never dies, the poem is alive in trees, dancing in the wind,
flying like a bird, a poet is free from suffering, a poet lives in the beauty of life’s soul,
enters its divine home and feels the timeless pleasure that pervades everything.

We have in Félix a great poet, the man that struggles to endure in beauty,
the wise soul that seeks the essence of life: the philosopher, the lover, his friend.
Nelly Jo Carmona
Actress and writer

A radiantly unique poetic voice. Félix blends both imagination and somber reality
as he discusses the places he’s lived and visited, and people he’s known.
The wonderland of Félix’s poetic world is alive and well in these pages.
Frannie Zellman, M.A. creative writing
Editor and contributor to the Fat Poets Speak series

To say Félix Garmendía has a way with words doesn’t begin to give his writing here justice. His words are an entry point into a life well lived, but a challenged life, too.
Felix spares nothing; his emotions are laid bare in the most extraordinarily touching
and accessible way. Sharing his remarkable journey via his poetry
conveys a gift that we must all learn from.
Bob Leahy
Publisher, PositiveLite.com

Menéalo, Menéalo, de aquí pallá, de allá pacá. Menéalo, que se empelota.
Stir it, stir it around and around or it will curdle…
Those were the playful lyrics to the dance of many tiny crabs that tickled the world’s belly and allowed for the birth of the Island of Puerto Rico.
Félix Garmendía was the narrator of the mythic story that traveled from town to town
and from square to square delighting audiences some forty years ago.
Through his journey Félix has been fine tuning the art of storytelling, listening,
dancing, and writing meaningful poetry so that life will never stand still.
Menéalo.
Rosa Luisa Márquez
Professor at University of Puerto Rico 1978–2011
with a specialty in Latin American contemporary theater.
Director, playwright, actress