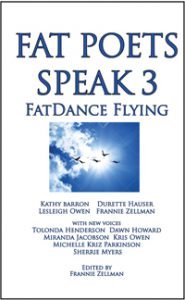 The Fat Poets’ Society writes about their joys, sorrows, anger, sadness, and pleasure at living in a world that constantly tries to reject and inhibit fat people. Volume 3 of the Fat Poets Speak series, Fat Poets Speak 3: FatDance Flying, comprises poems in which the poets alternately dance and fly, moving their feet and their bodies and then growing wings as they encompass the earth, above the earth, and finally, the sky, breaking the bodily barrier. To all who choose to read this volume, they say, “Come dance and fly with us.”

The Fat Poets’ Society began at a writing workshop at the 2006 convention of the National Association to Advance Fat Acceptance (NAAFA). The first volume in the series, Fat Poets Speak: Voices of the Fat Poets’ Society, was published by Pearlsong Press in May 2009 and praised as groundbreaking.

Some of us come to you from English major backgrounds; some, from music, sociology and accounting. We have stories to tell that are different, and yet similar. We have all faced discrimination, harassment and worse.

We write our poems in varying styles, some more narrative, some more freeflowing, some presenting in tropes, some in some of each. We explore different stages of ourselves as fat poets, some analyzing, some celebrating, some diffusing body images and breaking down the separations from our bodies and identities we have endured.

In Fat Poets 3: FatDance Flying we take on dancing and flying, two kinds of bodily liberation that have been either difficult or taboo for fat women.

We seek to reach the widest audience (pun partially intended) possible, including those who read and write poetry often, those who are familiar with fat-positive poetry, and those who are just discovering fat acceptance and liberation.

The poem cycle “The Days of Fat Lilith,”  which comprises the second part of Fat Poets Speak 3: FatDance Flying is being turned into a novel.

Check out the other books in the Fat Poets Speak series:

Grab the Lapels praise for the Fat Poets Speak series:

Fat Poets Speak: Voices of the Fat Poets’ Society
“Really, the glory of reading this collection is that it’s unique — the poets’ feelings about their fat bodies are typically silenced in media.”

Fat Poets Speak 2: Living and Loving Fatly
“This collection pushed me significantly. Though I’ve been reading about fat women for years now…the love of fat bodies was surprising. Some part of me has accepted tolerance, rather than love. Can you love a fat body — including your own? The answer is duh, yes, but because the message is so rarely distributed, I was shocked before I could normalize what I was reading.”

Fat Poets Speak 3: FatDance Flying
“Rather than being on the defensive as the authors seemed in Voices of the Fat Poets’ Society, the poets in FatDance Flying call out fatphobia, name it, tear it down or ignore it, taking away the power hate has over them and making the angry person sit in their hate stew. I found myself smiling while immersed in such poems….The poems felt more mature and subtle in FatDance Flying, demonstrating the way this group has grown as poets and people, and it was my favorite of the bunch.”