Also by Lonie McMichael, Ph.D.
Talking Fat: Health vs. Persuasion in the War on Our Bodies

Fat prejudice is exploding in American society,  yet even social justice advocates tend to deny fat individuals protection because fat is seen as unhealthy and permanently changeable—concepts supported by a great deal of societal belief and very little scientific evidence. Using bell hooks’ ideology of domination, Lonie McMichael explores the phenomena of fat prejudice—from inception to resistance—through a rhetorical lens. Looking at the actual experiences of fat people, she argues that fat prejudice is neither acceptable nor tolerable in our society.

Lonie McMichael earned her Ph.D. in technical communication & rhetoric at Texas Tech University, and is currently teaching at the University of Colorado in Colorado Springs. Acceptable Prejuice? is her second book. She is also the author of Talking Fat: Health vs. Persuasion in the War on Our Bodies (Pearlsong Press, August 2012).

“…a useful introduction to a burgeoning movement…
will make readers question their attitudes about overweight people.” 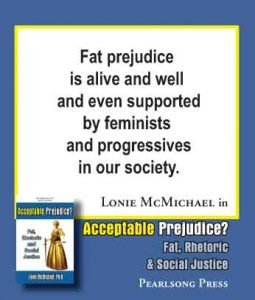 “Acceptable Prejudice? Fat, Rhetoric and Social Justice
is an ideal book for people new to the concept of fat acceptance.
McMichael writes a book that will answer all questions about this movement;
she describes and explains the aesthetic and psychological issues
surrounding the movement as well as its political, academic and health manifestations.
Thus, this book is a veritable encyclopedia that explains the what, when, why
and how of fat acceptance in ways palatable to both the serious scholar
and the curious layperson. If you have anything to do with fat acceptance,
Acceptable Prejudice should have a place on your bookshelf.” 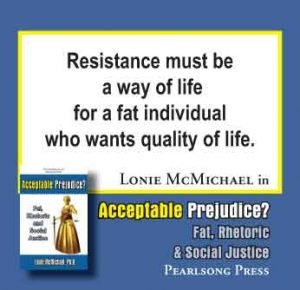 “Prejudices can only appear acceptable so long as we fail to see them
(and their connnections to each other) for their true impact in our lives.
Lonie McMichael clearly exposes how weight prejudice interacts with racism, sexism,
classism, ageism, and healthism—and how a wholehearted challenge to the former
also necessarily addresses all of the ways we’re excluded.” 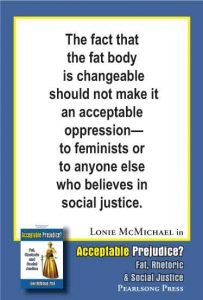 “One doesn’t have to travel far to hear about the alleged “obesity epidemic”
sweeping the globe, so it is with delight that I was able to read a copy of
Acceptable Prejudice? Fat, Rhetoric and Social Justice by Lonie McMichael.
Acceptable Prejudice? is a thought provoking read on the topic of fat stigma
and prejudice in current western society, given from the perspective of people
affected most by it—those that actually live in fat bodies. As a well-seasoned fat activist
for whom thinking about the perception of fat in society is a regular occurrence,
this book had me asking fresh questions and stretching my thoughts about
the dominant obesity rhetoric of our time. I even found myself
having a few lightbulb moments along the way too.

Acceptable Prejudice? tells the stories of fat people in our voices,
with honesty and clarity while asking the questions the dominant rhetoric refuses to ask.
It strips back the layers of societal conditioning to get to the real root of the issue—
the bare prejudice of the obesity epi-panic and the need for dominance
over marginalised people in society.” 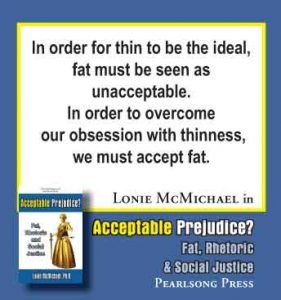 “A look into the normative narratives around fat bodies in society
and the forms of resistance from fat positive spaces.
This book is not only a valuable source for scholars already working in fat politics
but others who want to learn more about the movement as a whole.” 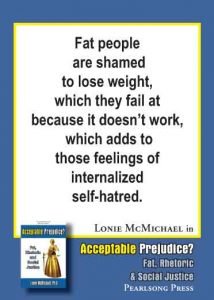