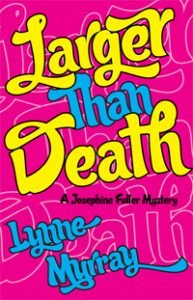 The return of Josephine Fuller! Larger Than Death was originally published in hardcover by Orloff Press and in paperback by St Martin’s Press, but went out of print. Pearlsong Press has republished the entire series in trade paperback & has published them in ebook for the first time.

Meet Josephine Fuller, a sleuth of size who doesn’t apologize.

Larger Than Death introduces “Jo” Fuller, full-figured and full of attitude with abundant sleuthing skills. In Larger Than Death Jo takes time off from her new job checking out potential charities for an eccentric socialite and walks into a murder scene. Her best friend and early role model, Nina—a plus-sized clothing designer—lies slain in her own apartment. Was she the victim of a serial killer who targets voluptuous women? Or is the murder personal?

As Jo copes with her friend’s murder, an unexpected romance and a bizarre host of neighbors, she races to find the killer before becoming the next victim.

Check out the other volumes in the Josephine Fuller mystery series

Other books by Lynne Murray

The Falstaff Vampire Files  |  Bride of the Living Dead

Praise for Larger Than Death

“Larger Than Death doesn’t have just one fat character, like most fat-positive books.
People of all weights and heights and shapes exist in these pages.
For that reason alone, Murray’s book is incredibly fat-positive and size-accepting…..Highly recommended.”
Grab the Lapels blog review

“Big is beautiful in this debut. Josephine Fuller is a character of substance,
not just size.”
Publishers Weekly

“Lynne Murray has developed a bold and gritty heroine.
The fresh, sassy voices of both Jo Fuller and her creator
are welcome additions to the mystery shelves.”
Selma Eichler
author of Murder Can Wreck Your Reunion

“Larger Than Death has more twists and turns than the curves of its amply endowed heroine.
Delicious reading!”
Cheri K. Erdman
author of Nothing to Lose & Live Large!