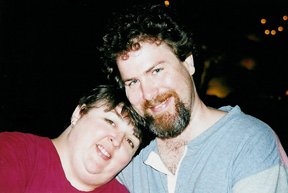 Pattie Thomas and her husband and co-author, Carl Wilkerson, live in Las Vegas, NV, where they run SINdustry City Media and Pattie teaches college. Pattie examines fattism and its consequences at the Psychology Today blog I Take Up Space. She & Carl blog about their adventures as a dyad with disabilities at their Psychology Today blog CWD (Couples With Disabilities).

Praise for Taking Up Space

A reluctant warrior in a war she did not particularly want to fight, Pattie Thomas may, in fact, be one of its most powerful spokespersons.

In what is best described as a private diary, she shares her journey of reexamining everything she, and every woman, has been told about being fat, and about health and beauty. The raw honesty and emotions in Taking Up Space are uncomfortable, even painful, to read at times. We can’t help but feel her same anger, disillusionment and anguish while trying to come to terms with being imperfect and different in a culture that glorifies impossibly narrow standards of beauty and health, especially for women.

But it’s a story that has never been more critical for us to read.

Our culture has this feeling that only after fat people have “fixed” themselves and conformed to thinness does what they say matter, let alone have credibility. A fat woman’s story might be accepted when she confesses to her sins and embodies the guilt and flaws everyone believes she must harbor to explain her fatness. Only a few fat women have dared to speak unapologetically about their lives. Yet sadly, even among many of them, there’s a feeling that to justify the space they occupy in this world they must be perfect in every way: in perfect health, with prestigious high-paying careers and living in perfectly coiffured homes. But that’s not real, and doesn’t describe nearly anyone. Our genetic makeup gives us equally diverse ranges of health, physical characteristics, aptitudes, and sizes.

Pattie answers the need for a powerful voice of truth in a world that disenfranchises those who don’t measure up—not just by being fat, but also by being a poor, working-class woman with a disability.

The central fact of much of her life was her fat body, but she never wanted it to be a central fact. “It should have been peripheral,” she writes. “How many people could write a complete book about the implications of having brown eyes?”

But she couldn’t help but take the war on fat people personally. Living in out society as a fat person means enduring a pervasive and constant torrent of harassment and threats, ridicule, ostracism, oppression and discrimination, and the stress of that hurts. It harms health, too, as do the dangerous and ineffective weight loss diets and “treatments” that have been imposed on fat people for decades.

“There is much about which fat people should be angry,” she writes. And mad enough to fight back and take back the power to decide what is best for themselves, ourselves. It’s not just a fight for fat people, but for those of all sizes, because the starving of an entire population in the name of health threatens everyone. “What is at stake is nothing less than the freedom for all of us to be what our bodies are meant to be. We are fighting for our beings, our lives.”

The private has become public. The government, medical professionals, public health officials, insurance companies, pharmaceutical industry, employers, managed care providers, media and researchers have made our weights a social problem and are making money off what should be a private matter, she says. They want fat people to either become victims by trying to lose weight and act in need of being saved from themselves—ourselves—or they’ll accuse fat people of being villains and dragging down society.

But, Pattie Thomas writes, “I believe telling people what to do with their bodies is the ultimate in limitation of the freedom of individuals.” And when we blindly accept authoritative statements, rather than look to good science ourselves, we give them the power to oppress us.

But the government, medical professionals, public health officials, insurance companies, pharmaceutical industry, employers, managed care providers, media and researchers are not our real enemy in this war. Our real enemy is the belief that fat is bad, Pattie says.

She came to realize that to win the war being waged against fat people we can stop fighting it. She shows us how to live unapologetically (whatever our size), care for the body nature gave us, and be comfortable within our own skins.

Coming to appreciate our differences and the beauty of fat, she writes, is to say that I get to to decide what I value, what I enjoy and what I want. “A fat woman happy with her body is a dangerous thing in this culture.”

In fact, any woman happy with her body is a liberated woman…free to take up space.