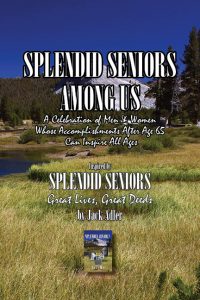 Splendid Seniors Among Us

In Splendid Seniors: Great Lives, Great Deeds, author Jack Adler recognizes 52 people throughout history who accomplished great things after age 65. In celebrating the 2007 publication of this inspiring book, Pearlsong Press decided to honor some of the many Splendid Seniors still among us.

We sought nominations nationwide of people whose accomplishments after age 65 warranted special recognition and could serve as an inspiration to others. Creativity, productivity, charity, political action, community involvement—any and all areas of life and personal expression were reason for nomination.

During that period there were three months we didn’t receive nominations that fit our criteria for “Splendid” status (which, admittedly, was purely of our own design and preference). Still, we ended up with nine wonderful people recognized as “Splendid Seniors Among Us” and included in the SSAU PDF ebook published in April 2008.

The ebook contains information about each of the honorees and the reasons they were chosen, excerpts from Splendid Seniors: Great Lives, Great Deeds, a message from the publisher, and information about Pearlsong Press and our books. You are welcome to share the ebook with anyone you wish.

Splendid Seniors Among Us honorees