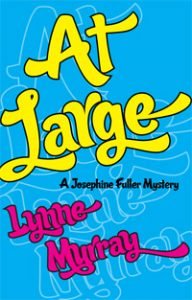 It’s a king-sized case for a queen-sized sleuth. In the third Josephine Fuller mystery, Jo is working undercover at a women’s skills center when she spots an old acquaintance. Jo last saw Teddy in Kathmandu when her photographer husband ran off with Teddy’s mountain-climbing wife, leaving the spouses to commiserate. Now Teddy has a new problem—his latest girlfriend is missing. Jo agrees to track her down, and the trail leads straight to his estranged wife, murdered with a climbing axe.

Jo suddenly finds herself a major suspect in the death of the woman who broke up her marriage. Add to that Jo’s already muddled love life, an apartment filled with haunting memories, and suspects ranging from the victim’s lesbian vegetarian sister to her fading film star mother, her politician stepfather and her mooching father, and Jo’s got her hands full.

Check out the other books in the Josephine Fuller mystery series

Other books by Lynne Murray

The Falstaff Vampire Files  |  Bride of the Living Dead

Praise for At Large

“Investigator Josephine Fuller is a large woman, but no challenge is too big for her.”
The Oklahoman

“Josephine Fuller charms the reader with her wry, self-deprecating humor and her passionate defense of the underdog.”
Donna Andrews
author of Murder with Peacocks

“This one is a winner, the kind of read you don’t want to put down unless the house is on fire.”
Lee Martindale
Rump Parliament Magazine

“A large dose of fun carefully entwined in a rip-snorting mystery.”
Crescent Blues